Happy Thanksgiving to everyone!

Adam Savage of Mythbusters had to go through the full body scanner, only for the TSA to miss the two 12-inch saw blades that he had in his jacket pocket. More of the mounting evidence that the full-body scanners see you naked really well, but aren't very good at spotting actual dangers.

So...they saw his junk, and missed saw blades. He mentions that his junk is offended by that. He uses profanity in this clip...just FYI.

This is a very telling video from ABC News in which billionaire Warren Buffett states that tickle-down economic theory doesn't work and hasn't worked.

Philip K. Howard talks with Jon Stewart about many of the problems that exist in the government today, and why neither party is offering good solutions but rather playing to their partisan garbage. Good stuff.

20 Things I Learned About Browsers and The Web

Google just released a cool little online-book that talks about all sorts of topics about The Internet and how web-browsers work in very approachable language for those that may not understand all the lingo used by people talking about The Web. Great resource! Pass it on! 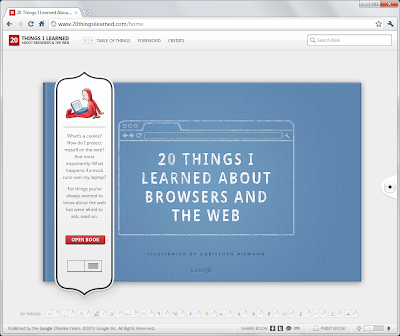 Republicans want an adult conversation to say, "Because I said so!"

People apparently still aren't onto the Republican strategy of not actually answering any questions about anything, but instead just regurgitating the talking points they were told to say by Republican leadership. Too bad the "adult conversation" the Republicans want is the one where they tell everyone "You are going to do this! Because I said so!" :-(

Tomorrow, November 17th, is National UnFriend Day! UnFriend the people who are not really your friends. A person cannot have hundreds (or thousands) of actual friends. Remember when you had to actually ask someone how they were or what they were up to? If you were really going to keep up with every person you've ever known, you would have found a way to do so without Facebook...but you didn't. They aren't your friends. Time to remove all those who are not really your friends.

I've been away from Facebook and nearly all the social networking sites for quite some time (Twitter, Orkut, MySpace, etc.). I appreciate all of my short list of real friends who actually have my phone number. So, since I'm not on Facebook, what will I be doing tomorrow? Tomorrow I will be dropping Google's site newsfeed, called "Buzz", that has been posting my comments, postings, videos and pictures when I make changes in Reader, Picasa, or Youtube. Tomorrow...the Buzz feed goes away.

More on National UnFriend Day...and how Facebook is actually retaliating to make it more difficult to un-friend someone:

Posted this on Google Reader a while ago as well, but posting it here too just simply because this is a great interview and Jon has a lot of very insightful things to say about the media and news in our society today.

The Story of Electronics

Because it is funny. I said it's funny!

Email ThisBlogThis!Share to TwitterShare to FacebookShare to Pinterest
Labels: Humor

The Empty Chamber of the U.S. Senate

I was watching the program "Need to Know" on PBS tonight, and happened across a segment that I felt was quite telling of the state of the U.S. Congress right now. I've often mentioned to friends that our own congress needs to be quite a bit more like the British House of Parliament, where they have 'lively' debate, and have what is spoken contested or answered on the spot.

The reality is that most debate in the U.S. Senate, for example, is just a hand-full of people for the benefit of the C-SPAN cameras and the public record. But otherwise there isn't actually a room full of Senators listening to debate or speeches on the legislation that is being discussed. No...Senators (and Representatives too) are all too busy to participate in that kind of wasting of time, otherwise know as discussion about a bill they will need to vote on.

George Packer from the New Yorker shares his thoughts and experiences with the U.S. Senate:

Click here to watch this segment on PBS.org
Posted by Evan at Friday, November 05, 2010 No comments:

This is something that has come up over and over again, and it is an issue that has been addressed everywhere from the comedic Jon Stewart to the press room at the White House. Fox News and other conservative pundits create quote a non-existent news item, and then they all cite each other as media sources where the issue is becoming big news.

I was listening to an interview with Senator-elect Dan Coates from Indiana by Robert Siegel where he says that everyone feels that the new Patient Protection and Affordable Care Act is not something they want and needs to be repealed. Siegel points out that Democrats point to polls that show that at least half of the American public doesn't think that it needs to be repealed. Coates states that everyone he's spoken to does. This is another example of these self-contained conservative news.

Mark you calendars, because November 17th is National Unfriend Day. It is the day to remove all those people on Facebook (and dare we say Twitter, Myspace, etc.) who are not really your friend.

Sadly I can't participate, since I'm not on any social network (unless you count Buzz....sigh....). But all of you can! Unfriend all those people who really aren't your friend, but just someone you know of or used to know of.
Posted by Evan at Friday, November 05, 2010 No comments:

Get out and vote!

Polls in Missouri are open until 7pm!
Posted by Evan at Tuesday, November 02, 2010 No comments:

Comments for Missouri Voters on Prop A

This has been a frustrating number of months approaching the election, which is tomorrow, November 2nd. Perhaps for not any of the reasons that are obvious necessarily. But I feel like there has been a gross amount of misinformation spread around, and VERY little effort to correct the narrative. But before I get into that, Missourians, here is where you can look up your polling place (sorry rest of the country...you'll have to Google yours):

Well, right into the frustrations in the present narrative promoted by Republicans, Tea Partiers, and conservative talking heads...it seems to me that there is a very angry and paranoid view of things in the U.S. contributing to the 'collapse of American values' and other similar fictitious notions.

Proposition A will be on the ballot tomorrow for Missourians. It will basically require city populations to have to vote on measures to institute an earnings tax, similar to what Kansas City and St. Louis currently have. On the surface this would seem to be a no-brainer, just as many of the commercials are portraying it...of course you want people to have decision power over what taxation is added to them. But first you have to know what those earnings taxes presently pay for, and if the voter culture here is something that it makes sense to allow them to govern those decisions via a vote. In Missouri the general opinion is that ALL taxation is wrong and bad, and that any service that there is should be individually purchased and paid for, rather than provided for by taxation.

I really don't believe that many people actually understand how for that notion would go though. Do you really want to pay for all the utility lines and streets right in front of your home? What if the neighbors on either side of you don't maintain their utility lines or the street? Are you going to pitch in the extra? What about police and fire protection? Are you going to pay for those? What if your neighbor doesn't pay for fire protection and their home...15 feet from yours...goes up in flames? Are you going to pay extra when your insurance company charges you more if your neighbors don't pay for fire or police protection because you are a greater liability to their profits? What if people don't maintain the streets to your place of employment?

Most people don't even consider how interconnected most of the services we have in our society are. They just think of themselves and the fact they don't like all the places their taxes are going, or just simply think that taxation is not constitutional. Kansas City's City Manager has neatly broken down generally how the removal of the earnings tax will affect Kansas City here. A lot of it is fire and police protection. But there is some tourism and general services in the mix too. Imagine if you would want to head to Kansas City for the weekend if the museums or the zoo lost a good portion of their funding and couldn't remain open by ticket sales alone. What about if all the St. Louis renewal of the downtown area stopped, or if the they could no longer keep the St. Louis arch, or the zoos open because of lack of funding in the tourism budgets? Both cities stand to lose much more than merely the money from an earnings tax. They may also lose money from visitors and tourism in the process as well.

It makes more sense to vote 'no' on Proposition A, and let the people of Kansas City and St. Louis go to their city councils to make sure the city is responsible for the monies they take in with that tax, as well as the budget in general. If the people want a voice in their cities...voting 'yes' on Prop A is the passive aggressive version of action. Better to take a truly active approach...vote 'no' and get involved in your city and let the city council hear your voice in person. Nothing Proposition A has to offer will in reality be good for any community in Missouri, much less Kansas City or St. Louis, which are the only two cities that have the earnings tax in the first place.
Posted by Evan at Monday, November 01, 2010 No comments: