What is essentially domestic terrorism has been occurring in various locations where Democratic Congresspersons have been threatened and had their property damaged over this vote about health care reform. Notes left and verbal threats have pointed to this directly.

Domestic terrorism being defined as, "[involving] groups or individuals whose terrorist activities are directed at our government or people in US without foreign direction. Terrorism is the systematic use of terror especially as a means of coercion." In this case coercion to repeal the new health care legislation via acts of violence and threats.

Some of the people who have opposed this health care legislation have used a quote from Thomas Jefferson to justify their actions: "The tree of liberty must be refreshed from time to time with the blood of patriots & tyrants." They often follow that quote with a statement like, "She's looking very thirsty lately!" However, this type of 'revolutionary' sort of statement isn't what Thomas Jefferson was saying. Let us break this down by year to demonstrate:


Thomas Jefferson was referring to the Shaysites that happened to be killed as the "tree of liberty" being "refreshed from time to time with the blood of patriots and tyrants."  Here is the full quote:

"God forbid we should ever be twenty years without such a rebellion. The people cannot be all, and always, well informed. The part which is wrong will be discontented, in proportion to the importance of the facts they misconceive. If they remain quiet under such misconceptions, it is lethargy, the forerunner of death to the public liberty. ... And what country can preserve its liberties, if its rulers are not warned from time to time, that this people preserve the spirit of resistance? Let them take arms. The remedy is to set them right as to the facts, pardon and pacify them. What signify a few lives lost in a century or two? The tree of liberty must be refreshed from time to time, with the blood of patriots and tyrants. It is its natural manure."

Here is another explanation that I found recently from a blog called "The Rude Pundit":
So, like, for a long time, as a threat to people in power, protesters trot out this line from Thomas Jefferson: "The tree of liberty must be refreshed from time to time with the blood of patriots & tyrants." It's been tossed back and forth between the left and right like a football at recess at the special school, although most often it's proudly displayed by the yahoos in some extreme right wing nutzoid movements, be it militias or the townhall idiots. And it'd be a poignant quote, one that gets us back to our roots as a revolutionary society. Except that Jefferson was actually talking about the blood of ignorant people who rise up in arms against the American government, too. In fact, it was mostly their blood.
The entire letter makes this clear, and, as with so many things properly understood in relation to the Founders, it is stunningly prescient. Jefferson was talking to John Adams' son-in-law about Shays' Rebellion, a truly fascinating episode in the early history of the nation, pre-Constitution, but post-Revolution, where rural Massachusetts citizens rose up against the state's government over issues of taxes and debt. They were crushed, of course, and many of the politicians of the time were all a-twitter with how this was an attack on liberty and how the rebels should be put to death.
And while he could be something of a drama queen in his rhetoric - well, really, they all could be (it's the effect of long-term wig-wearing) - Jefferson's essential message in his letter was, more or less, "Chill. Stupid people will act stupidly." Or, as he put it, "I say nothing of it's motives. They were founded in ignorance, not wickedness. God forbid we should ever be 20 years without such a rebellion. The people cannot be all, & always well informed. The part which is wrong will be discontented in proportion to the importance of the facts they misconceive. If they remain quiet under such misconceptions it is a lethargy, the forerunner of death to the public liberty."
See, Jefferson was forgiving the dumb, saying it was better to have idiots uprising than to have no civic engagement at all. But we have to understand that they're dumb and that the dumber they are, the more they will rage in their dumbness. Prior to the famous quote, Jefferson wrote, "We have had 13 states independent 11 years. There has been one rebellion. That comes to one rebellion in a century & a half for each state. What country before ever existed a century & a half without a rebellion? & what country can preserve it's liberties if their rulers are not warned from time to time that their people preserve the spirit of resistance? Let them take arms. The remedy is to set them right as to facts, pardon & pacify them. What signify a few lives lost in a century or two?" 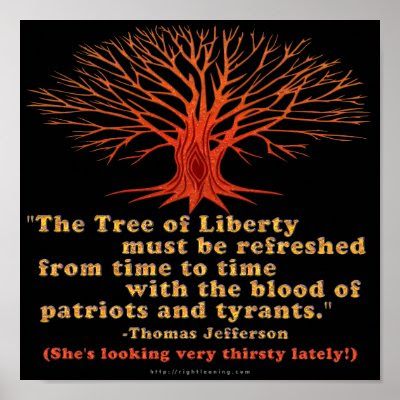 Now we have people who associate themselves with the present Tea Party Movement, people vocal about opposing health care legislation or insurance reform, and often people vocal about their opposition to the Obama Presidency in general, taking up the symbol of the Tree of Liberty to symbolize their cause, using acts of violence and threats to reverse legislation passed by their democratically elected Congresspersons and President.  They are encouraging taking up arms and forming community militia to oppose enforcement of law, should whatever conflict they believe may happen comes to pass....even though no threats or conflict from the government has been in play in the first place.

All the while believing that Jefferson's words are supportive of their actions, when in reality the Tea Party of today are the new Shaysites....often misinformed, lacking a complete picture of the issues they protest, and collectively issuing little threats (whether they be real or not) concerning action against the government.  I just hope that the Tea Party followers aren't bound to repeat history.
Posted by Evan at Wednesday, March 24, 2010