Repost: It's Lonely Out There

It's lonely out there
Connections fray in wired America, study finds 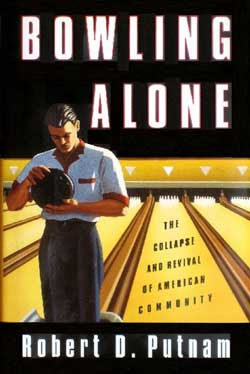 A major national survey being released today shows that the average number of people with whom Americans discuss important matters has dropped from three to two in just two decades. The study is a vindication for the Harvard author of "Bowling Alone," Robert D. Putnam, who published a similar theory six years ago based on trends from the decline of dinner parties to lower voter turnout and falling participation in bowling leagues.

Americans don't have as many close friends as they used to.

We're networking on myspace.com, sharing photos and text messaging on our cellphones, and blogging at all hours. But a major national survey being released today shows that the average number of people with whom Americans discuss important matters has dropped from three to two in just two decades, a steep falloff in confidants that startled the researchers.

The study by sociologists at Duke University and the University of Arizona provides powerful evidence for the argument that the country is becoming increasingly socially isolated even as cellphones, the Internet, and other technology make people more interconnected. The authors found that fully one-quarter of Americans say they have no one with whom to discuss their most important personal business.

The study is a vindication for the Harvard author of "Bowling Alone," the provocative book published six years ago that portrayed an increasingly lonely society based on trends from the decline of dinner parties to lower voter turnout and falling participation in bowling leagues. The title became a catchphrase for modern alienation, fueling a passionate debate over whether the "good old days" are really behind us.

"These are the kinds of people that you can call on when you have times of trouble, if you really need help or someone to move in with for three months after Katrina hits your house. . . . We've got less of a safety net," said Lynn Smith-Lovin , a Duke sociologist and coauthor of "Social Isolation in America," published in today's American Sociological Review.

Putnam said the new study, based on a comparison of data from national surveys in 1985 and 2004, captures escalating social isolation that began around 1965 as the rise of television, two-career households, and increasingly farflung suburbia combined to destroy old, close-knit neighborhoods. Putnam believes that growing isolation helps explain the escalating rate of depression and other signs of worsening mental and physical health.

"As a risk factor for premature death, social isolation is as big an independent risk factor for death as smoking," said Putnam, a professor of public policy at Harvard University. He said that the drop-off in confidants measured by Smith-Lovin and her coauthors was even more precipitous than he anticipated.

Some academic critics have said Putnam overstated the degree of social isolation, pointing out that bowling leagues have been replaced by other, more powerful connections, such as e-mail. For instance, in other studies, two thirds of Internet users say it draws them closer to friends. Others pointed out that critics have been decrying the decline of community for much of the last century: The authors of the landmark Middletown studies in Muncie, Ind., in the 1920s worried that automobiles and radio were making people more isolated.

The new study, based on face-to-face interviews with a nationally representative group of 1,467 adults, provides the most comprehensive look yet at Americans' degree of social connectedness. The 20-minute questionnaire was done by pollsters at the University of Chicago as part of their General Social Survey, one of the longest-running national surveys of social, cultural, and political issues.

In the survey, respondents were asked to identify people with whom they had discussed important personal issues in the past six months. On average, they named 2.08 people in 2004 compared with 2.94 in 1985. Almost half of those surveyed could name only one or no confidants, while the portion with at least six close friends has dwindled to 4.9 percent of the population.

The researchers said that over the 20 years, Americans were most likely to turn away from friendships outside of their families. Four out of five people surveyed in 2004 said they only talk to family members about important personal matters, compared with 57 percent in 1985. The percentage of people who confide only in their spouse increased from 5 percent to 9 percent.

"We were surprised to see such a large change. We remain cautious -- perhaps even skeptical -- of its size," said Miller McPherson , a Duke and Arizona sociologist and Smith-Lovins's husband. "But even if the change is exaggerated for some reason . . . we are confident there is a trend toward smaller, closer social networks more centered on spouses and partners."

There were striking differences in social connection among demographic groups: White people, young people, and people with more education tended to have larger social networks than non-whites, older Americans, and people with less education. African-American men over the age of 60 saw the biggest overall drop-off in confidants, from 3.6 people in 1985 to 1.8 in 2004. "People who are disadvantaged in various ways are especially likely to have smaller, more family-based networks" of confidants, said Smith-Lovins.

Smith-Lovins said other research that she is now analyzing shows that Americans belong to fewer outside organizations and spend less time with them than they used to, while spending more time at work and with their families. She concedes that the numbers tend to support Putnam's "bowling alone" theory, though she still believes he has overstated the decline of social connections.

But Putnam said the new study underscores the need to look more closely at how intimacy and community are getting lost in the rapid changes of American society. Some have chided Putnam for appearing to champion a 1950s version of "the good old days," but he said that's not true. "We should think of new things to connect us, not try to resuscitate your grandfather's Kiwanis Club," he said.

Scott Allen can be reached at allen@globe.com.